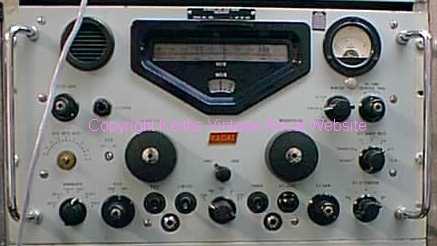 Note the missing Bfo knob on the left of the RX,it has been "borrowed" to fit on a RA17L.The Bfo is not used on this set as it is used with an RA63

The RA117 was not a replacement for the RA17 but was produced alongside it.The reason for producing two similar receivers at the same time escapes me,other than the fact that the RA117's design made it more suitable for use with external control equipment .As the set has connectors favored by the Americans (SO239 & BNC) perhaps it was aimed for the North American market.The 117,whilst looking, very similar to its RA17 cousins is quite a bit different.On the front panel the only obvious changes are the "terminated wideband" caption on the pre-selector and the rotary switch for the S-METER fitted to this model.On the rear panel though there are quite a few differences from the RA17 mainly to do with the bnc connectors used to connect to other accessories.Inside the set the changes are a little more involved. The Wadley Loop is still there and the "upper" levels of the RF sections are much the same, the main differences come with the "lower" IF sections.where there is an extra IF stage.The power rectifiers are semiconductor and the RA117E had a semiconductor AGC board fitted.

What makes this set a little more interesting than the RA17 is that provision is made for 2nd vfo input and output on the rear panel.So.....If you connect the vfo to say an MA79you can have full transcieve facilities using either the RA117 or the MA79 tuning control.Another possibility is to use a MA350B Decade frequency generator.This gives you "synthesized" control over the RX/TX allowing improved frequency selection and stabilization.

Specifications are basically similar to the RA17.

As this set is similar to the RA17 many of the potential problems are the same.

Here is a view of the filter units with the covers removed. 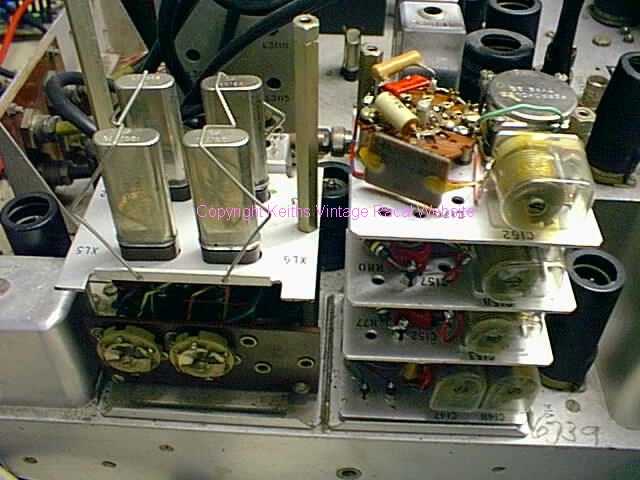 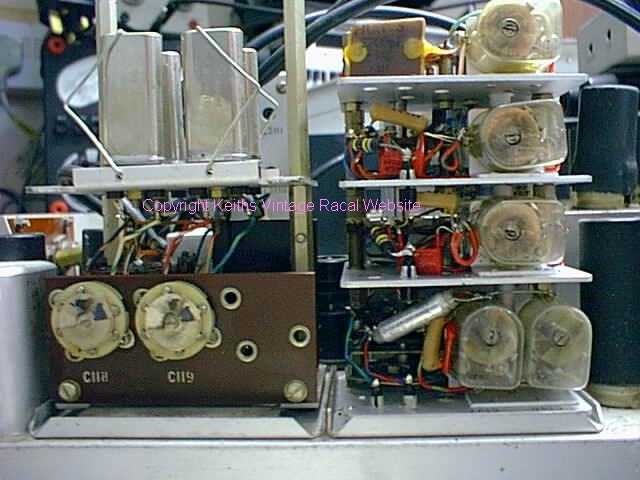 A general view of the top and bottom of the set,the bottom view has the screening covers removed from the filter units. 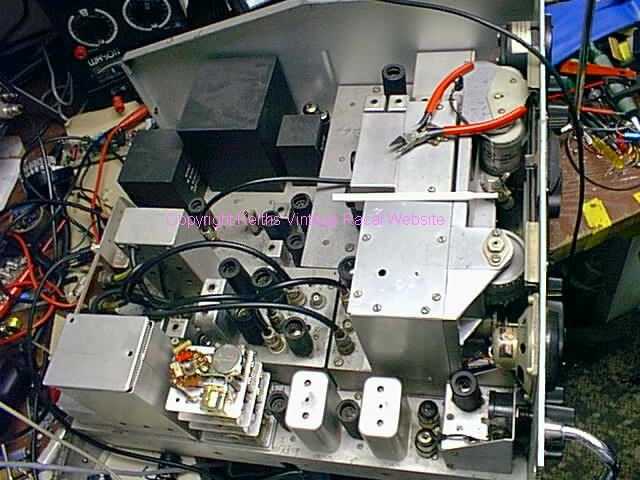 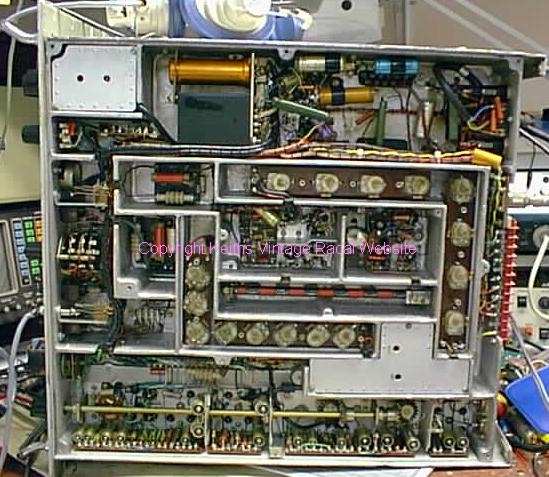 I have added some info, taken from Admiralty documentation, as to why the RA117E was acquired by the Royal Navy.

"During the mid 1950's it was becoming increasingly obvious that the then current RN comms equipment was hopelessly inefficient in terms of man power, the use of the RF spectrum and also unable to cope with the requirements of the up and coming data transmission -Radio Automatic Teletype (RATT). Following a study into the future of RN Comms published in 1958 the RN immediately set into motion a major upgrade to its comms systems.

The Racal RA117 Rx and its ISB whilst not operable from an external standard frequency source was both accurate and stable if supplied from an external frequency synthesizer. RA117's were immediately procured under COMIST but had to be modified in order that they could be used for RATT reception. It was necessary to increase the AGC time constant in order to receive RATT and alter the Rx output so that it could drive the RATT equipment.

The modified RA117's were designated as CJK. The CJK were used in conjunction with a commercially produced Tx (Marconi NT204) designated Type 640. By the mid 1960's the CJK were being replaced by the new ICS Rx CJA/CJC which was a valve Rx built by Marconi. The specification of the CJA/CJC I understand is superior to that of the CJK.

This shows you that the RA117 was modified not to have a superior AGC but a longer time constant for "data" working."

The following photographs show the CJK outfit as fitted in a preserved Royal Navy Destroyer that was paid off in 1972.

I have included photo's for comparison ,that also show the Murphy series of receivers that were still being used at this time. It so happens that I own a model of each of the following receivers shown and I can personally vouch for the considerable improvement in performance of the RA117 over the older systems. 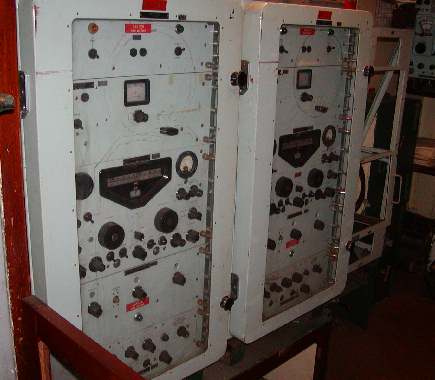 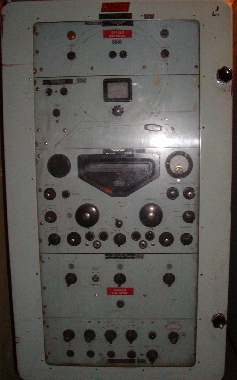 A pair of CJK outfits to the left and a separate photo of the first cabinet to the right.

The caption above the first unit. 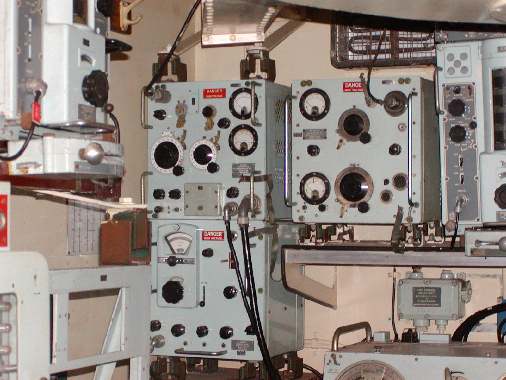 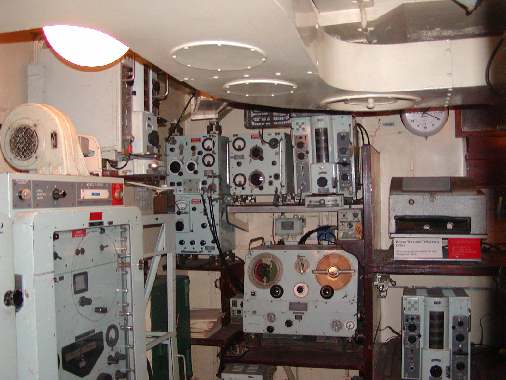 The photo to the left shows the Murphy Type 618 Tx/Rx unit.Also shown are some of the B40 series of receivers. The R/H photo shows a more general view including the CJK units to the left and ,mid right, the Teleprinter units.The top of the Control/PSU for the Type 618 is visible just below the shelf at the bottom of the picture.


The five pictures above were taken in the Bridge Wireless Office of HMS Cavalier. This ship is preserved at the "Historic Chatham Dockyard" which is located in the town of Chatham in Kent.There are many attractions to be seen here including a large collection of Lifeboats, the Rope Factory with its incredible one quarter mile long building and also HMS Ocelot, an "O" Class Diesel Electric Submarine.

Its well worth a visit and don't forget to make a donation to HMS Cavalier to help keep her going !!

Documentation from Racal lists the RA117E as "Admiralty Version for RA220".

The CJK outfit consists of a cabinet containing :

The sequential numbers of the units within the CJK indicate that each unit,though available for general use elsewhere in the basic form, may have been slightly modified for use in the CJK thus requiring a Patt No change.

The 117E(CJK) was used in the SSB mode all the time for receiving RATT. In fact MOD policy was to use another RATT link to other stations where the other half of the Side Band had been so that there was a great space saving in the rf spectrum.

The CJK outfit matches closely the RA220 ( which had a number of versions).The use of the RA218 , an Independent Side Band Unit ,indicates that the intended primary use of the 117E was not for SSB voice /CW working but unattended reception of ISB RATT links as described above. A fact supported by the CJK documentation.


I was very surprised to read in a recent magazine that fellow Racal enthusiast Rob had told the author of the article that the RA117E was used for SSB.The author seems blissfully unaware that the reference to SSB does not include speech transmissions as referred to in the article. After a phone call from Rob it became clear that he was well aware of its intended use in the CJK outfit , as I suspected ,so why has the author tried to mislead his readers in this way..? Now who is insulting their readers intelligence...?? I am not normally into quotes, but as they seem to be all the fashion at the moment, I would like to mention "Crows Law" stated by MR John Crow, a reader in English at Kings College London who once said... "Do not think what you want to think until you know what you ought to know".


My thanks to the Royal Navy Museum of Communications and Radar , HMS Collingwood,for supplying the relevant Admiralty documents for this information.