The next generation of receiver to follow the RA17/RA117 incorporated transistors for the first time . It is open to question if this lead to any improvement in performance.

The RA1217, and its table top brother the RA217, is virtually a solid state version of the RA117 ,the only electrical differences are in the reception of SSB signals.The set can resolve USB,LSB and AM using separate demodulators, and with the use of a BFO, CW can be resolved.

The mechanical construction is very different.Where the RA117 had a height of 10.5 inches the RA1217 is only 3.5 inches high.Inside construction is quite a bit different too with modules being used for all the different stages.The use of modules can make fault finding a bit easier,as long as you have a replacement module.If you don't have a spare module then fault finding can sometimes be awkward ,but not impossible.

In use you are confronted by the "standard" two tuning knobs,the one on the left for MHZ tuning, the one on the right for KHZ tuning just as in the earlier designs.The difference now being that they drive a mechanical digital readout.The control for the MHZ tuning is is pretty innocuous and is treated in exactly the same way as in earlier sets :i.e. you set it and leave it. The KHZ tuning may take some getting used to if you have never used one before.The tuning action is not as smooth as the earlier valved sets and you are constantly aware of the digits clicking over as set is tuned,you can't throw the knob around as you can on the other sets.

There is RF tuning and an attenuator as before. The system switch is slightly different in that it has three AGC settings ,short,medium,and long.There is a preset dimmer control for the panel lamps and a fine tune control . Like the RA117 the 2nd VFO can be switched from internal to external from the front panel but now there is a knob fitted for this.

The BANDWIDTH control is a 5 position switch with 3 filters fitted as standard, 8 KHZ,3 KHZ and 200 HZ with provision inside the set to add two additional filters.Above this is the mode switch with LSB,USB,AM and then 5 positions of BFO setting.To the right of this control is the BFO TUNE and below this the co-axial VOLUME/RF-GAIN control.

Like the other sets the RA1217 had a number of connectors on the rear panel for accessories.

Views of the inside 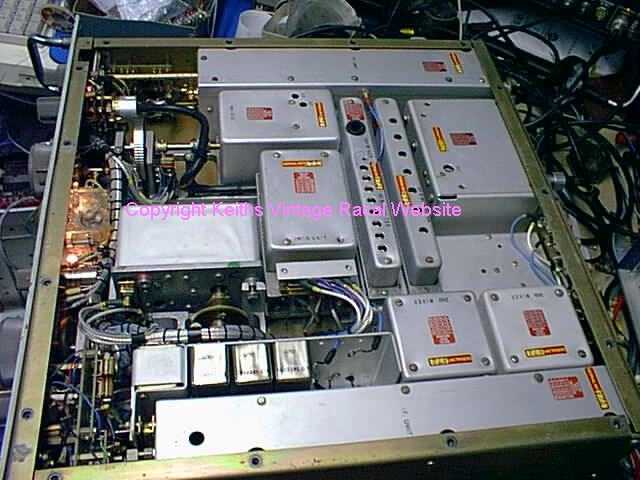 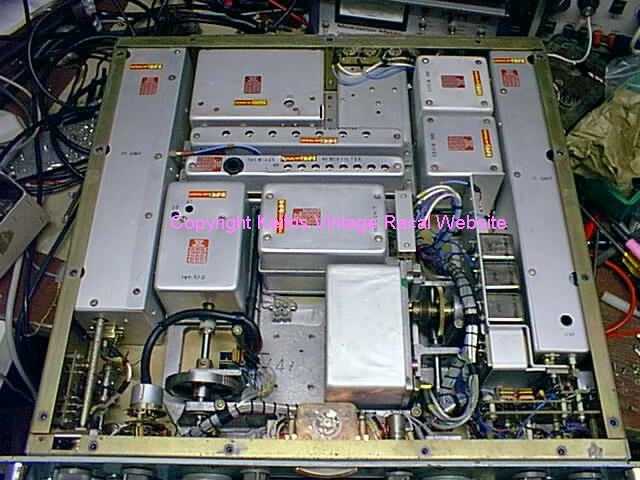 The RA1217 suffers,like the RA217 and the RA1218,from Front End overload.It is sometimes difficult to select the correct peak on the RF TUNE control and the WideBand position is virtually unusable near strong signals.The use of an ATU is desirable and the RF ATTENUATOR will have to be used in some cases.

Having said that the RA1217 is a nice receiver and, like the RA1218, will out perform a lot of sets of the day.A quick check on one of mine produced a sensitivity of 1uv for 12db s/n at 10MHZ and 1uv for 8db s/n at 29.5 MHZ.Not quite up to the advertised spec but it still performs well.Despite a few repairs being carried out I have never performed a full alignment so perhaps this could be improved upon.

The RA1217 was also made by Racal USA.Here the set was called the RA6217.I do not have much info on these sets but I believe they were essentially the same as the UK versions.

Pictured above and below is the RA6217D. This is a remotely controlled set. Despite the fact I have one of these units I know nothing about it..!

Not included in theses pictures is what I believe to be the control panel for this radio.It is much the same as the RA1217 on the front panel but inside it is very much different with very few components and,I assume,a rotary control of some sort.(there are the remains of a wafer switch left).

If anyone has ANY information on this unit I would LOVE to hear from you.

These two views show the set from above and a view of the rear panel.