This is the receiver,which,I think I can safely say, got RACAL on their feet.

There were many variants of this design,some specialized. I will therefore stick to the three main models.

The mk2 was introduced about 1 year after the mk1 and apart from some cosmetic changes and small changes made to the 100khz filter unit it is virtually identical.

This set incorporated a number of changes over the earlier models.The bandwidths were changed and the preselector was changed to a double tuned circuit.

Racal also changed the rf amplifier from an E180F device to an ECC189,the two mixer valves were changed from EK90 to 6BE6W and they altered the agc system somewhat.

Frequency Coverage. 1-30 mhz (coverage extends to 500khz with a slight drop in performance.)

Stability. Less than 50hz/hr drift after warm up under constant supply and temperature conditions. 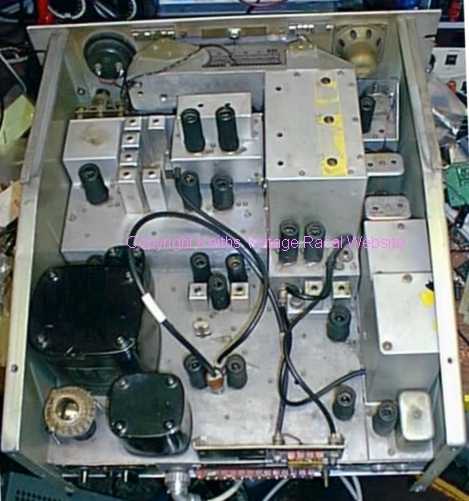 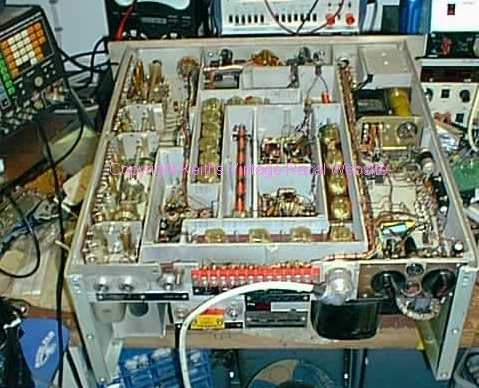 This picture shows the rear connectors. From left to right along the bottom we have the mains voltage selector plugs and mains and ht fuses.Next the mains power connector.The terminal strip comes next and gives output at 10mw 600ohm ,50 mw at 3ohm,three outputs of 3mw at 600 ohm,and avc output for other devices.The antenna connector comes next and this should be isolated from the main chassis by being mounted on a paxoline plate.This helps to reduce rf getting into the wrong parts of the receiver.We then come to the two 100 k/cs if outputs.Above all this are the output sockets from the 1mhz oscillator and the rf output socket,for,example,the LF adaptor.Behind the yellow warning tab are the terminals for breaking the ht.This could be used to mute the RX and is used with the RA73/RA137 lf convertor.I have stumbled upon a number of sets, from time to time,sold off cheap by dealers as non workers because they have not noticed this link was broken.

It may be useful to note that when the line outputs on the terminal strip are not being used they should really be terminated with an appropriate resistor.Very few people do this and it causes few problems,but there we are..!

In a review of the RA17 in a UK magazine somewhile back and then a 'follow up' article the next month on AGC the reviewer makes some very misleading and incorrect comments about the AGC system on the RA17.

There are comments in the original articles that state that because the manual of the RA117E shows modifications to its A.G.C circuitry then Racal were aware of the shortcomings of its A.G.C design and introduced modifications for better performance .There are also statements that the game was given away by a series of modifications made to the RA17 by Racal which acknowledged that the original design was not correctly sorted out.

The RA117E was produced for use with the Royal Navy for RATT links and more details can be found on the RA117 page.

There never were a series of modifications to the RA17's A.G.C system and when the author made a comment in a E:mail message to me ( and then did not have the grace to point the fact out in his article) that Racal had made drastic changes to the RA17's A.G.C and that it made his point that there was something very wrong I began to realize that the author did not know what was talking about.

Indeed the author seems very confused about what was said in E mail exchanges between us. He even said how well laid out my site is and how informative it is , slightly different to what was published don't you think ?. ( assuming you are one of the few readers of this publication of course, and I do understand that those of you outside the UK won't have a clue what I am going on about) .If he can't cope with getting things like this right I can't think what happens when he gets something as complicated as a radio in front of him.

A look at the circuit diagrams of the various models produced over the years shows that "nothing drastic" was changed. Indeed only two modifications are listed, one to alter the A.G.C for re broadcast work under "customer request only" ,and the other, to replace the obsolete thermionic detector diode with a silicon one "on failure"

As the RA17 and RA117 models were produced alongside one another you would think that if the RA17 was so bad the modifications incorporated to the "superior" RA117E would have been made to all of the breed and that all RA117's would have been produced as "E" models. As this was not the case then we can safely say that the RA17's or indeed the RA117's A.G.C did not have any "shortcomings".

Some may argue that the RA17 was only intended for AM/CW operation. This is not so as the RA101A, RA101B and RA102 prove.These receiver setups consisted, basically ,of an RA17 and an RA63 Single Side Band Adapter.( LF convertor in the RA102)

The RA63 was produced at a very early stage for use with the RA17 and followed Racal's policy of supplying accessories for their equipment. No doubt Racal would point out that this enabled their customers to acquire exactly the system they required. Others may have seen it as a good way of keeping the profits up.

Now lets take a look at the A.G.C. characteristics for the RA17L and the RA117

As you can see the characteristics are the same for both the RA17L and the RA117 it is only the Admiralty model RA117E which has altered AGC characteristics.

According to the Racal manual the rise time of the RA117E is in the order of 2-3 m/s and the release time in Long position is 10 SECONDS. The Naval documents quote the rise time as Short charge 2ms, discharge 200ms Long charge 3ms, discharge 5s

I doubt that anyone would claim the RA17 and its associated characteristics are perfect , very few receivers ever are. It is important however to ensure that the Facts presented correctly.

"Sorry I didn't get back to you about the so-called 'RA17 agc problem'. I personally didn't encounter any serious problems with the agc and asked several of my colleagues who were around during the early days and drew a blank there. Danny Webb was also unaware of any serious problem."

In my opinion this section clearly demonstrates that it is important, when reading such articles,to take note of where these articles are appearing and who is producing them before any conclusions are made about the accuracy of the content. Especially when that magazine refuses to acknowledge these errors and the editor refuses to acknowledge my right to reply.

With the age of these sets there are bound to be a few around with some problems.

Look out for cooked resistors and capacitors ( it may mean taking the covers off).All of these components are easily replaceable (well once the thing is apart!!)

Valves are still available so should present no problem.

The 37.5 and 40 mhz filters can present a problem.The mica capacitors can go faulty here with a resulting loss in performance.Again the components are easily replaced but re-tuning the filters needs to be done correctly.You can get away with tuning the filters for maximum signal, as read on the RF-Meter on the front panel,but,the WADLEY LOOP design allows for drift in the upper rf stages and if these filters are tuned with too sharp a response your signal will fall outside the filter bandwidth and you will end up with a deaf receiver, probably with lots of spurious responses. Swept alignment is required here (especially the 40mhz filter) suitable equipment being a Samwell and Hutton 78m or its military equivalent,the CT501, and there is always the Polyskop if you can find one.

Drift in the 2nd vfo (main tuning) is common, but again is (usually) easily cured by replacing the relevant components in the vfo unit.To get to these components however,the vfo unit has to be removed from the set which means removing the front panel and getting access to the underside of the set to de-solder the power connections.

You may of course have problems due to mechanical stability which may,in extreme,cases require a replacement unit.Good second-hand ones are often available here in the UK and, occasionally brand new unissued units.

Spurious responses may result from incorrectly aligned filters,as mentioned above,but may be due to poor screening.Check that the screening covers on the underside of the set are firmly in place,that mating surfaces are clean,and that all fixing screws are present and reasonably tight.Check also that the vfo units are secure and are NOT touching one another.Of course all valves should have their screening cans fitted (except the rectifier).