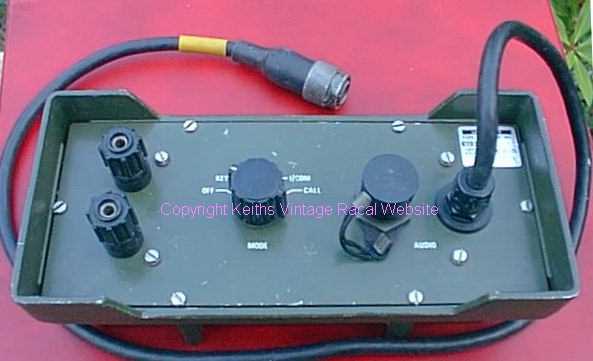 The Racal MA985B is a Local Control Unit which enables Racal manpacks to be operated in transmit and receive mode up to 2 miles away using a 2 wire line (D10 cable) and a suitable remote unit, usually the MA986B. Voice , Key or Intercom mode can be selected by setting the appropriate switch on the local unit. Power to operate the unit is taken from the manpack via the flying lead and power is sent down the 2 wire line to the Remote Unit.Maximum current drawn by the two units is 90ma at 12-30V DC. From this it can be seen that the units are suitable for use with the TRA931 and TRA967 manpacks as well as the Comcal and Squadcal series.

The flying lead on the MA985B is connected to the audio socket on the manpack. Twin line is then connected to the two terminals on the Local Unit and then this line is run out to the Remote Unit. The required combination of handsets/headsets/morse key/ rtty units etc are then connected to the 2 audio connectors on the Remote Unit.There are 4 modes of operation, "INTERCOM" where the remote and local operators may speak to one another, "KEY" where the remote or local operators may communicate via the radio using Morse, "VOICE" as with Key operation but using speech and "CALL" emits a warbling calling tone in both local and remote handsets.

Connecting the MA985B to the Field Telephone ,using about 10 feet of wire, and then to the TRA 967 proved that basic transmit and receive would be possible using this combination and a more ambitious set up was later tried.We unrolled about 600 yards , or so, of grey telephone line ,as used by British Telecom. This was laid out down the farm yard and both the TRA931 and TRA967 were used. No contacts were attempted on the TRA931 due to the set only running on the whip and there being no possibility to quickly change frequency in case of interference. Received signals were perfectly readable and I see no reason why full TX/RX would not work just as well. Using the TRA967 was a different matter. A quiet channel was chosen on 6M and with a local amateur using a hand held we tried a number of tests to see how the setup would perform, even having him stand next to me while we had a QSO. Everything worked very well and there was no sign of break through on the 2 wire line despite running the antenna from the handheld along it while transmitting. If you have your TRA967 up on a shelf in the shack and you want to use it to monitor a local channel whilst you sun yourself in the garden then look out for an MA985B and MA968B/UK/PTC/404 combination. 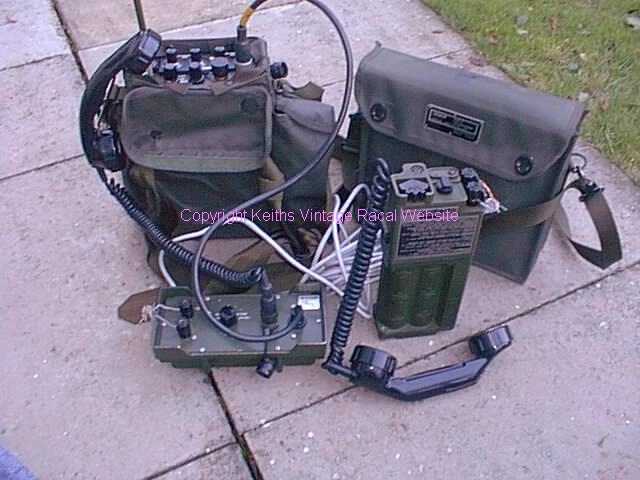 It may be worthwhile spending a little time describing the Field Telephones as there are quite a lot of them about just now.

Designated 2C704/1 ( UK/PTC/404) ,these telephones run off of 6V provided by 4 D Cells fitted into the units.They will operate over distances of up to 28km using D10 cable and have a "Whisper" function , like the TRA967, where the operator can talk at very low levels, yet still be heard at normal levels at the other end of the line.They are made from Aluminium castings , are rugged and waterproof. A satchel is provided for storage of the 'phones and spare batteries and the units may be operated whilst still in the satchel. Battery life is estimated at 85 days assuming a duty cycle of 1:20:20 (Call:Speaking:Listening). The total weight of one unit , including spare batteries, 2.75 kg.