Racal became into being when two gentlemen by the names of Ray Brown and Jock Calder Cunningham got together to form a company to make HF communications equipment.

They used their first names to "christen" their company RAyCALder and initially run the company from Ray Browns flat in London.

Unfortunately both men are now dead.Jock Cunningham died in 1958 and (Sir)Ray Brown in 1991. Fortunately an accountant by the name of Earnest Harrison was recruited in 1951 and he worked his way through the company to become Managing Director and helped to steer Racal into the giant that it was.

The early days were different however and the company took on almost anything to keep the work force busy.

Luckily for Racal they were able to clinch an order from the Royal Navy for an HF receiver,although at the time they had a slight problem in that they had no receiver to offer!! a contract to make a receiver for Collins having fallen through.The company were then put in touch with Trevor Wadley,a South African,who had developed the "Wadley Loop" system.A demonstration was made of the "Wadley" receiver to the Royal Navy,they were suitably impressed, and, providing that Racal could make the sets for £300 each,and with the same specification ,then an order for several hundred radios was assured

There were quite a few problems with spurious responses in the prototype models,this was cured, apparently, by band sawing one of the sets in half. In production models the 1st and 2nd VFO's are in separate units,and although they are bolted side by side on the main chassis,this cured the problem.

As I understand it, this radio with the band saw marks,used to be in Racals reception area,and I had wondered if this was still the case until I got this message,on the 12th November 2000, from Cathie Roberts........"The radio is still part of Racal's display, but is now in their Business Centre Demonstration Room at their Bracknell HQ. This news comes from a Racal employee who saw this particular radio last week."

This set then,became the RA17.

The rest is,I suppose,history.Racal grew and bought up a number of manufactures on their way to becoming a multi million dollar company.However nothing stays the same and Racal Communications were merged into Racal Tacticom in 1990 , the two companies became Racal Radio.This company carried on into 1998 when it was merged with Racal Radar Defence Systems and was then known as Racal Defence Systems.This company was then bought by Thomson-CSF in June 2000, and was called Thomson-CSF Racal.

Well if the name Thomson-CSF Racal is un-inspiring what of the name THALES..? Just keep an eye open for Wells .!

Last Year I wrote "What next I wonder...As we here in the UK see all of our major industries sold off to foreign buyers." Well a picture that I had sent to me recently probably says it all. 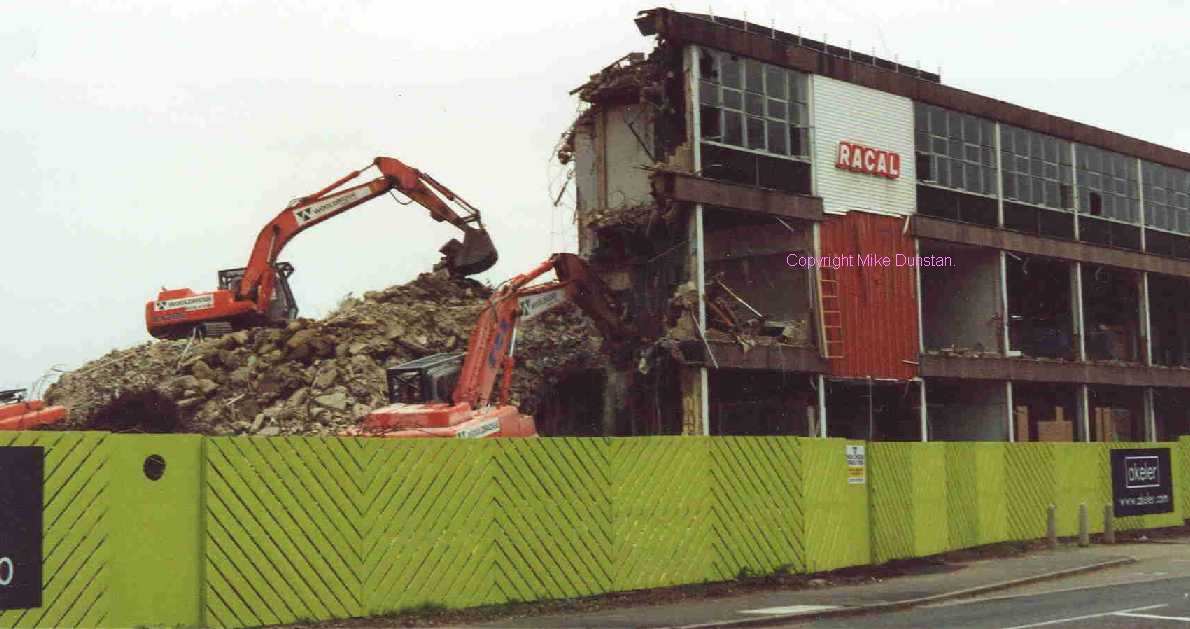 This is the text that came with the picture ..."To let you know. The Western Road sites in Bracknell will be closing for good in June. The old site (Bracknell end of the road) closes in December. The radio division will almost be nothing. "