Reference is made, in certain manuals, to "Multimeter Electronic CT471". This section will hopefully explain just what one is.!

There are variants of the CT471. i.e. "A" ,"B","C" models. Usually when there are differing suffixes to a model number the changes are internal and the external appearence stays much the same.

As far as I can tell this is not so for the CT471. I have a CT471A made by AVO and another, a CT471C made by G.E.Bradley and despite their spec being similar they are quite different physically. 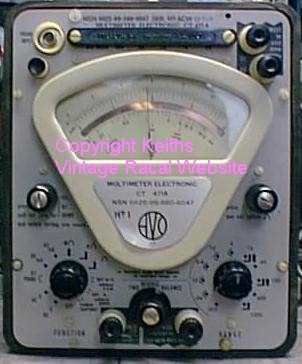 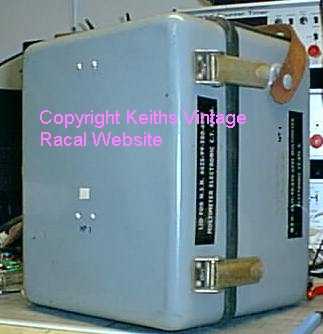 Above we can see the front panel of the Avo CT471A and, to the right, the CT471 in its ruggedized case.The photo below right, shows the removable lid which houses the rf probes/leads. 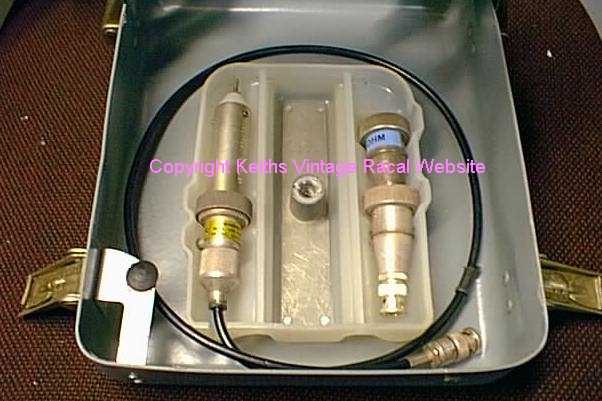 The unit is easy to use. One terminal is used as the "Common" connection for all ranges while one terminal is used for all DC,AC and resistance measurments.To the top right of the panel are the two terminals for 1200 v DC/AC measurements.Top left is a BNC connector for use with the RF Probe. A "function" switch on the bottom left selects DC/AC volts/amps etc while to switch to the right selects the required range.Bottom center is a switch to select Forward or Reverse on the meter and there is also the facility to "Center" the meter so you can use the unit as a " Center Zero MultiMeter".One the top center there is a row of preset pots under a cover to allow "standardizing" of the ranges up to 1.2V to an accuracy of 0.5%.

The whole thing is built into a steel ruggedized case and as the meter is "shock mounted" you get the impression that it is virtually indestructable.A removable cover on the top of the unit allows access to the 7 (yes seven) D Cells which give a life of 150 hours.A nice feature of this set is that when the top cover is in place a switch is activated disconnecting the batteries, which is handy if you forget to switch the thing off! You won't then come to use it months later only to find the batteries flat. 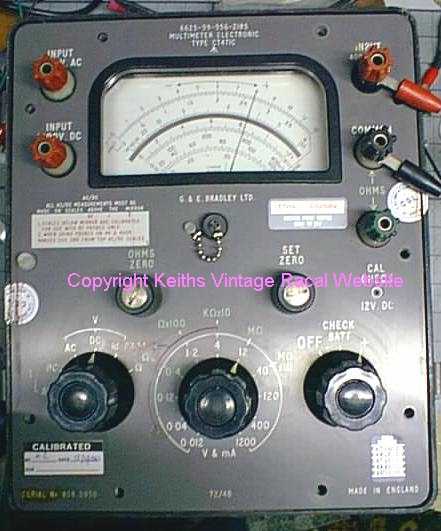 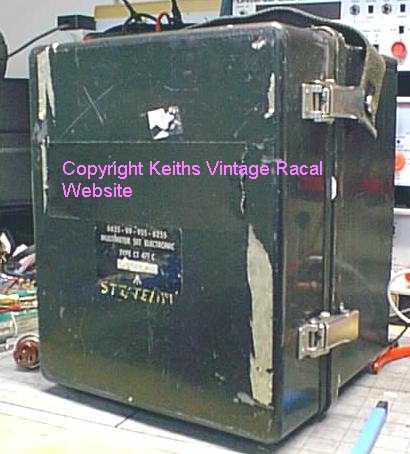 Above we can see the front panel of the Bradley CT471C and, to the right, the CT471 in its case.The photo below right, shows the removable lid which houses the rf probes/leads. 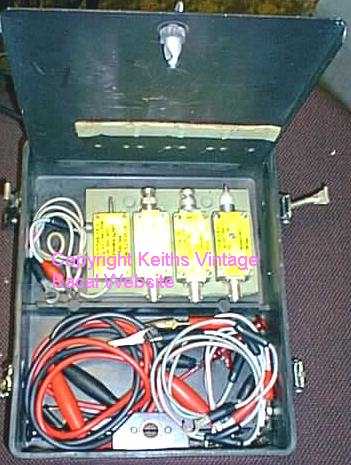 Again this unit is easy to use. The controls work much the same as the AVO CT471A and overall the operation is the same.The terminals used to connect it " to the outside world" are in different positions but that is about the only difference as far as operation is concerned. The Rf Probes are a little different as they do not connect through a BNC but are connected to the main terminals.

Although this set is of sturdy construction it does not feel as solid as the AVO model .Only Three D Cells are required in this set and provision was made for a mains power supply to be fitted in place of the batteries. If you forget to switch it off... Hard luck.!! You will have flat batteries next time you go to use it.!!

Both Sets are easy to use and enable the owner to have a precision instrument at a cheap price.They are not small but they are repairable and enable the user to make accurate measurements with a high impedance input with an analogue meter.Anyone who has had to make measurements on a varying signal i.e. AGC, using a high impedance digital multimeter will appreciate these units. They have the advantage over the "Traditional" Valve voltmeter of being more stable, initially,and not requiring a mains supply. I had my AVO meter given to me in a non working condition.All it would do was swing the needle on the meter over to FSD on all DC ranges. AC measurements were OK. This was quickly attributed to a fault in the DC Amplifier and after a quick look I spotted that a previous attempt at repair had missed a faulty transistor and had fitted a new transistor the wrong way round....not to mention the mess of soldering inside!! So within an hour I had a working meter.

Attempts at Calibrating the AVO took a little longer.I managed to get the DC ranges into spec, JUST, but the RF ranges are out of spec by quite a bit. Checks on the probes show these to be OK so the problem may be due to out of spec components within the set itself or it may still be suffering from previous incompetent repair attempts. AC and Resistance Ranges are spot on.

The Bradley on the other hand is well within spec but,of course, this set shows no sign of being repaired. I does have a somewhat old fashioned feel to it. The big Bakelite knobs add to this and the darker colour of the front panel contrasts with the lighter Battleship Grey of the more modern looking AVO.However I prefer the "uncluttered" feel of the Bradley. The Terminals are more spaced apart than the AVO making it easier to connect the probes and I have found difficulty in removing the RF Probe BNC connector on the AVO. Inside ,the AVO is the slightly easier to work on as it is better laid out than the Bradley.

I "found" my CT471C lanquishing on the floor in the mud at a rally, it had all of the front panel screws ( which, incidentally are nylon on both sets) missing and after paying £15 for it I though I must be mad. However 3 D Cells later I was the happy owner of a fully working meter.

Please don't ask me about the different models as I do not have a Clue..! My manual for the Bradley refers to the CT741, CT471B and the CT471C so possibly only the CT471A was made by AVO..?

Back to Test Gear main Page